the painting in chauvet’s cave – traces and motion 40000 years ago! 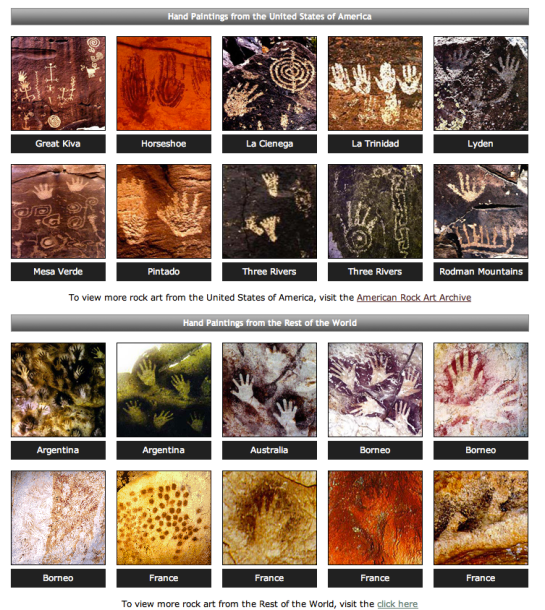 Hand paintings are depicted in Rock Art around the world. The hand image would have been created in a variety of ways: the artist may have used the hand on the rock as a stencil, spraying paint from the mouth or charcoal powder through a reed; the outline of the hand may have been painted around by brush; or simply painting the hand and then placing it on the rock. The hand paintings were created by men, women and children. What ever the method, and what ever the style of accompanying art, hand paintings are one of the most common elements of rock art.

But what of their meaning? Was this the signature of the artist, confirming both his or her work as well as his or her self-awareness? Was it the artist, or shaman, touching the the rock surface in order to acknowledge and therefore enter the spirit world, known as the ‘sealing’ ritual? Where there is a spiral incorporated into the motif, as at La Cienega and Three Rivers for example, they may be depictions of healing energy that channels through the hands – the ancient practice of Reiki. There might have been a metaphorical link between the ‘spraying on of paint’ with the ‘spraying on of medicine’ by the shaman.

Given that the images exist around the world, and cover a great time span, clearly there must be a variety of meanings. For all of the hypotheses, hand painting and the ‘hand’ motif could have represented any number of rituals, but without knowledgeable informants from a particular culture, hypotheses they must remain.

In Chauvet, France, the red ochre hand prints and stencils are found in chambers throughout the cave. These were painted during the Aurignacian culture, possibly 31,000 years ago. In the Brunel Chamber, the four panels are comprised of 420 prints of palms covered with ochre. In the Red Panels Gallery, the Panel of Hand Stencils is comprised of 3 red hand stencils, 2 clusters of dots and 2 black animals – an equid and a mammoth. Two of the hand stencils sit within the outlines of the animals. In the Panel of the Red Dots, a cave painting located near the cave entrance, is composed of a cluster of large dots, which may represent a mammoth. It is perhaps one of the earliest examples of pointillism. The scientists discovered that the dots were created by covering the palm of the right hand with wet red paint and applying the hand to the wall. The consistency of the dots suggests that the painting was created by one person. The artist would have had an image in his or her mind before beginning the piece. In other words, it appears not to be a random composition.

Cuevas de las Manos, Argentina [Spanish for Cave of the Hands) , has an incredible panel of hand paintings, made by the indigenous inhabitants (possibly forefathers of the Tehuelches) some 9,000 years ago. The hands have mainly been stencilled. Within the cave there are also depictions of human beings, guanacos, rheas, felines and other animals, as well as geometric shapes, zigzag patterns, red dots, representations of the sun, and hunting scenes. Most of the painted hands are left hands, and of a size that resembles that of a 13-year-old boy; this may have been an initiation ceremony.

In Borneo, Jean-Michel Chazine has been exploring the remote region of East Kalimantan, where he and his research team have discovered over 1,500 negative handprints in 30 caves. Most of them were found not in the lowest caves beside rivers – but from archaeological evidence they were used as dwellings as long as 12,000 years ago – but instead in the highest and most inaccessible caves. A special effort had been made, repeatedly, to create the hand paintings, possibly by a limited number of participants. Unlike the hand paintings found in the rest of the world, many in the Kalimantan caves are decorated with dots, dashes, and patterns – possible depictions of healing energy channelled through the hands.

Some hand paintings depict an apparently missing finger. These ‘mutilated’ stencils could have been made by the artist bending the finger in a type of sign language. However, it is also possible that the amputation of fingers at the joints was part of shamanic initiation rituals at certain times during the Upper Palaeolithic. Finger mutation is certainly known in other parts of the world, such as southern Africa where it is practiced by the Khoekhoe [Clottes & Lewis-Williams, 1996]. Grotte de Gargas – the Gargas cave – in the French Pyrenees, where the hand stencils have been dated to 27,000 BC, has examples of this phenomenon.